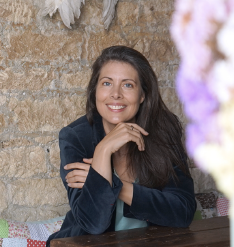 N.E. McMorran is a British-Cypriot autistic writer, designer and teacher, who lives with her teen and their rescued dog, Ben. She’s a foodie and loves fixing stuff and helping people. Her special interests are autism, art, natural living, and finding a solution to end homelessness. She previously worked for the BBC as researcher and photographer, taught in London schools, and founded/managed a magazine publishing company.
She currently volunteers with the NAS and facilitates the London based Spondylux Press, run by autistic professionals to publish inclusive neurodiverse works.
McMorran attributes her achievements to her creative and autistic traits - persistence, imagination, mimicry, problem solving, empathy and intuition, hyper focus and attention to detail.

Moojag reflects the author’s experiences growing up undiagnosed in a neurodiverse family, and the journey to her late autism diagnosis.
As a child she listened in awe to her parents’ made-up stories about giant animated rock candy, and greedy fairies who magic-up sweet treats. (No surprise she has a sweet tooth!) In her 30s, after moving to Cyprus, she decided to write a book based on their stories: 'The Gajoomstiks’ and 'Poof Poof'. She wrote a page, but put it away. She became a mum and started telling her own made-up stories. A few years later she experienced autistic ‘burnout’. When she returned to London with her son to home educate and get support, she started writing again. Their experiences began to feed the story and it was through 'Moojag' that she realised she fit the criteria for autism. Two years later, at age 43, she received her formal diagnosis from the Lorna Wing Centre (NAS).